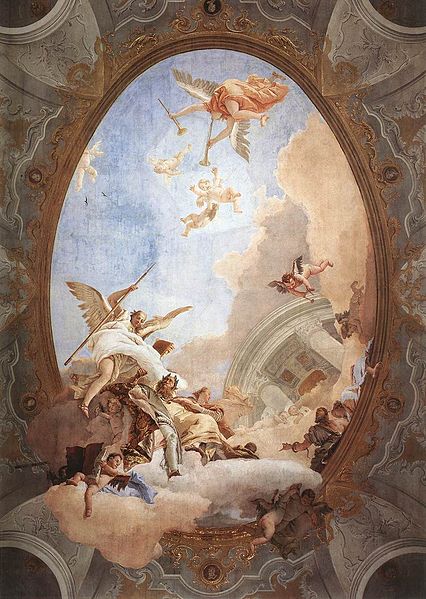 There is a critical concept I have long been trying to put in a form that will do work, or illuminate art when applied, like Eliot’s “objective correlative” or Harold Bloom’s “anxiety of influence” (which it sort of resembles, or disputes). For now I am calling it “the Tiepolo effect”. It arises when an ambitious artist, Tiepolo being a type or clear instance, does work that echoes or replicates in some large way the work of his or her medium’s defining figures in an earlier, usually a recent, age.  But the replication is not homage, or continuation of the classic forms; it proceeds instead by emptying out from that earlier work something essential to it – its vision, its purposefulness – so that what is apprehended in the new work is above all the artist’s hand and eye, the delight in sheer mastery.  Not mastery of a huge vision of the existing world, or of human life and fate, but rather of the vocabularies and gestures by which such mastery was imposed in the earlier history of the art. Since this new art is using the matter and mode but not the impulse of an earlier, sincere art, it has to be insincere at bottom; but that insincerity is its signal virtue. There’s nothing in it of homage or imitation, but at the same time no mockery, or camp, or denigration, or alienation. By a process of brilliantly reminding us of what it is not – its great predecessors – it makes something new. The effect is of a double vision; it tickles, and the right response is delighted laughter.

Tiepolo’s vast Rococo ceilings – blue skies filled with evaporating heavenly clouds toward which pretty angels hustle the souls of departed bishops or Hapsburg princes, the borders and lunettes filled with cherubs proffering laurels, beasts,  curling banners, robes, piles of arms, masted ships with bellied silken sails – are certainly descended from the ceilings and frescoes of the Renaissance and the Baroque, and it’s possible to imagine Tiepolo as a striving young artist staring at them and trying to work out how this or that effect – this ascending foreshortened body, that uplifted face – was achieved, and when he’d got it, making sure that viewers could see he’d got it.  In deploying that mastery he made what in the older art had been heavy, in all senses, into all that is light, even lite. I can’t say that he emptied from the form  its religious program, but that was the effect of his method; the transparent lightness signals to us that we really need not care about the apotheosis under way; rather we are to feel ascendant ourselves into a thrilling – though evanescent, insincere – heavens.

Here’s an example from another medium. It’s said that when Akira Kurosawa was making his early samurai films, he tried to figure out how John Ford in his Westerns had given such power and affect to a scene of a character who has been gun-shot or arrow-pierced, falls with great slowness to the ground. Somehow such moments seemed to be prolonged beyond what was possible for an actor and a camera. Unable to figure it out, Kurosawa shot his falling dead men in slow motion to reproduce the effect. The first audiences for those films, both in Japan and America, were all familiar with the Ford films, and would have felt – even if unconsciously – the double vision in seeing Kurosawa’s slow-motion trick. But Kurosawa wasn’t trying to fool us. The solution wasn’t – though the story of his working it out implies it – a failure. It was a success. Kurosawa was showing us the Ford moment, emptied of its original life-and-death power by becoming an obvious yet subtle gesture, a gesture in an art of his own. In Russian formalist literary criticism this is called baring the device. It’s not supposed to go unnoticed.

Ours is an era of homage in art, including the arts of language,  that can also be called an era of imitation, an era of empty repetition, the compounding of tropes that once had power to shock, or move, or astonish, but that now are mostly reminiscence — the pleasure is in the recognition, and in the simple changes rung upon them (what was bad  is turned good, what was glamorous >tawdry, what was subtle >obvious). Much of this imitation is loving if obvious homage, or winking cleverness.  Yet now and then a creator with a deep sense of the past of her art can turn the Kurosawa trick, bring off the Tiepolo effect, and enlarge rather than starving her sources.