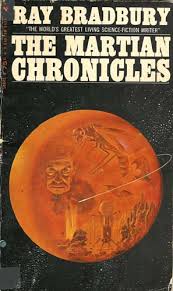 Ray Bradbury died in 2012 at 91, as full of years as his writing life was of words typed and seen into print. It’s impossible to mourn such a death, or such a life, as seemingly fulfilled as any mortal could aspire to.  What remains are the books and stories and our memory of them and our encounters with them, and thus with him: the shared wake accorded not to a body but to a body of work.

The critic Leslie Fiedler once pointed out how many of the classic American fictions have spent some part of their careers as books for boys: Huckleberry Finn, Moby Dick, The Last of the Mohicans, The Call of the Wild.  Fiedler opined that books failing to pass through that limbo could end up as books for adolescents: Thomas Wolfe was his example.  Fiedler loved the weird reaches of American popular literature, including science fiction, but he likely would have been surprised to find that the ongoing and ramifying Library of America series,  the American Pléiade, has come to include the likes of Philip K. Dick, Edgar Rice Burroughs, and H.P. Lovecraft — the lower orders getting above themselves, rather than the greats in exile.  Now that Bradbury is with them in Elysium they will probably be publishing something of his, though he isn’t much like them, nor like the other pop icons and specialists who are being named beside him in the obituaries: less peculiar in all senses, more agreeable, with a wide if shallow appeal.

Who hasn’t read him?  What boy?  My first encounter was with The October Country (1955), which I began reading believing it to be a novel; the first tale, of circus dwarfs and a hall of mirrors, was followed by the one about the couple in Mexico and the mummified corpses and the fate of the dead spouse left among them.  I was spellbound. How would he bring those concepts into one story?  Well I have always regretted that it wasn’t a novel, but the stories in the book are (in one sense) deathless.  You know the one — either through reading it or hearing it told, like a folk tale, as many of Bradbury’s are — about the man who believes his skeleton is plotting against him, and who has it dealt with by a weird practitioner.  The last moment is the wife’s arriving home to find him:

It was not so bad, finding an intact, gelatin-skinned jellyfish in one’s living room.  One could step back from it

The three dots are Bradbury’s own, and typical of the mode and the time. There was a nice illustration.

Bradbury began as and basically continued as a pulp writer of horror and fantasy stories, set mostly in contemporary America, and including a string of science fiction stories, because science fiction was the fantasy mode of his time. Bradbury in his SF wrote about the prospect of nuclear destruction and the possibilities and dangers of the future, but though he was asked to “conceptualize” the Future for the US Pavilion at the 1964 World’s fair, he wasn’t much interested in science, or in the warning/promising business.  He was at bottom a churner, an opportunist, a typist (he wrote the novella “The Fireman”, which would evolve into Fahrenheit 451, in nine days on a ten cents-an-hour rented typewriter), who could write anything, whose stories could be effectively adapted to EC Comics (and were) as well as to movies (Truffaut’s film of Fahrenheit 451 exists on a different plane from the somewhat programmatic novel).

The work of his I remember best, from when I read him more or less constantly, were the stories and books that were the least fantastical: “The Wonderful Ice-Cream Suit,” “A Medicine for Melancholy,” “The Watchful Poker Chip of H. Matisse” — even the effusively sentimental Dandelion Wine.  I am reluctant to re-read these; I am afraid the eternal literary adolescent in Bradbury chimed too well with the temporary adolescent I was.

And yet The Martian Chronicles,  his best book, despite its moments of sentimentality and obviousness — qualities that can destroy self-conscious literary endeavors even as they give power to wilful pulp — deserves the Library of America’s glossy black covers and ribbon bookmark.  Not so much for the cheesily effective opening tale, in which the first space travelers are fooled by cunning Martians into thinking Mars is really an Edenic afterlife where Gram and Gramps are still on the front porch and pie is cooling on the sill, only to be destroyed by the illusion; but for the later, ineffably melancholy brief recountings of desolation and dust and compromised hopes on the real Mars.  Of course Bradbury’s Mars is no more real than Burroughs’s, and is nothing like Kim Stanley Robinson’s carefully accurate depictions of colonization and terraforming.  It’s an American counterworld where the facts of Martian physical life are not so much transcended as ignored, so that a dream derived not from folklore or myth or pulp fantasizing but from the shared life of its readers can play out.  Bradbury’s own longings for home, for goodness, for family love, for American innocence, are at once expressed and confounded, fulfilled and defeated. Not a fable, or a lesson, or a trick, or a joke — not a story-spinner’s story — it is unique in his huge pile of work, and in American letters.